Concerts Around the Corner,  New Year’s Day, Concert for Peace

Concerts Around the Corner,

Concerts Around the Corner, 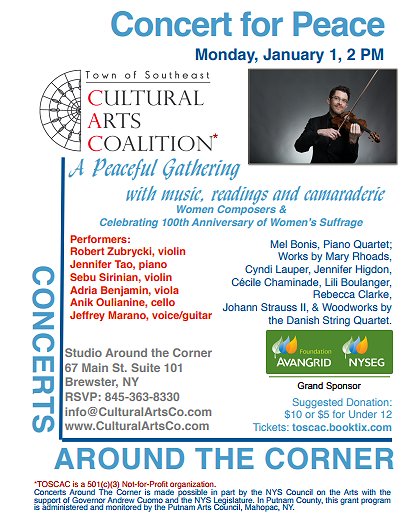 Start your new year at a peaceful gathering, with music, readings and camaraderie. This year’s concert will highlight women composers and celebrate the 100th anniversary of women’s right to vote! Jennifer Tao, piano; Robert Zubrycki, violin;  Sebu Sirinian, violin;  Adria Benjamin, viola; and Anik Oulianine, cello. Poetry by Maya Angelou and more will be recited. Amy Campanaro, director of the Southeast Museum, has prepared a talk about women’s suffrage.

Mélanie Hélène Bonis, (1858-1937) taught herself the piano, in a hostile family environment, until the age of twelve, when her parents, influenced by one of their friends, a professor at the prestigious Conservatoire, resigned themselves to give her a musical education. She was introduced to César Franck, who was so impressed with her abilities that he made arrangements for her to be admitted to the then all-male Paris Conservatory, in 1876. While at the Conservatoire, she fell in love with a fellow student, a relationship her parents disapproved of, so she was removed from the school and later forced into an arranged marriage. Since women composers were not taken seriously at the time, she composed under the pseudonym, Mel Bonis. Camille Saint-Saëns highly praised her chamber music and could not believe a man had not composed it. This was both a compliment and a sad commentary on the fact that women composers were basically ignored and regarded as second rate. We’re thrilled to perform her gorgeous piano quartet at the Studio Around the Corner.

Mary Rhoads (Lotus Pond, Lament for the Lost Children) was a jazz and classical performer, composer a feminist and the mother of local artist and teacher, Sharon Nakazato. Mary taught at the University of Northern Colorado and later settled in Seattle, where she continued composing and performing.

Violinist, Robert Zubrycki, is currently Concertmaster for the New York City Chamber Orchestra, a member of the American Symphony Orchestra, the Stamford Symphony, and has performed in the orchestra for the American Ballet Theater at Lincoln Center. He has recently performed as Concertmaster for the New York Choral Society at Carnegie Hall, Encores! at City Center, the Northeastern Pennsylvania Philharmonic and for Pope Francis at St. Patrick’s Cathedral. A veteran of dozens of Broadway shows, Bob performed in the orchestra for “She Loves Me” and previously performed in “A Gentleman’s Guide To Love and Murder”, winner of the 2014 Tony Award for Best New Musical and he can be heard on the recent cast recordings of “She Loves Me”, “An American in Paris” and “Paint Your Wagon” (violin and mandolin). He has won an Emmy Award for his musical contribution to the documentary, “The Curse of the Bambino”. As the first violinist for the Queen’s Chamber Band and the Abaca String Band, Robert has recorded extensively and toured United States, including performances at the Chautauqua Institute and the White House. At this performance, Bob will be joined by his colleagues from The American Symphony, Amici New York, New York City Chamber Orchestra and Broadway.

Tickets are a suggested donation of $10; $5 for children under 12.  Reservations are recommended, as seating is limited. Tickets can be purchased online at toscac.booktix.com or call (845) 363 – 8330 or email [email protected] for reservations.

Concerts Around The Corner is made possible in part by the NYS Council on the Arts with the support of Governor Andrew Cuomo and the NYS Legislature. In Putnam County, this grant program is administered and monitored by the Putnam Arts Council, Mahopac, NY.

Cultural Arts Coalition and Studio Around the Corner

About The Town of Southeast Cultural Arts Coalition

The Town of Southeast Cultural Arts Coalition is a not-for-profit organization dedicated to creating and sustaining cultural arts within the Town of Southeast and its surrounding region. TOSCAC was established as a 501(c)(3) not-for-profit corporation in August 2010 with the purpose, as detailed in the incorporation papers, “… to promote and raise funds for the development and effective management of affordable, accessible performance space that will provide citizens of the Town of Southeast opportunities to participate in and appreciate cultural arts, including lectures, theater, dance, film, music, visual arts, and inclusive community events.”   Our current focus is the renovation of the Southeast Old Town Hall, a historic landmark within the Village of Brewster and a perfect venue to serve as a cultural hub. The Old Town Hall has been described as a “Jewel in the Center of Brewster” and its renovation will help foster the revitalization of downtown Brewster.