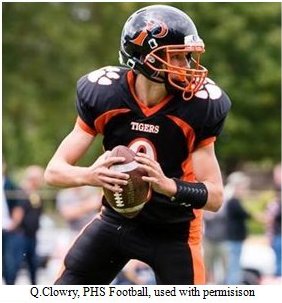 Frustration and disapproval were the prevailing sentiments from several Pawling High School parents and community members at the Board of Education (BOE) Meeting on January 22, 2018. The concerns were regarding the recent announcement from Superintendent Ward. “In the fall we have made the decision to go to eight-man football. We have a number of players that need to be eligible for each game, that’s been problematic over the last several years due to a combination of enrollment decline [and] parents being somewhat more hesitant about student participation in football,” said Dr. Ward at the previous BOE meeting.

Comments at yesterdays BOE meeting expressed frustration by which the decision was made, due to the fact that there was lack of public and student involvement during the discussion. “One of my concerns is the way this was handled,” expressed Glen Carey, former Village Mayor. “I think there probably should have been a meeting with the team and the parents before the decision was made.”

Parents of the players were also present and vocal. Chris Clowry, a parent who also played for the Pawling Tigers during the 1980’s and helps coach and mentor the current roster though town leagues, voiced displeasure at the hasty decision and how it came about without public input. “Football is a big part of Pawling,” said Mr. Clowry, “and I don’t think you should take this away from the kids.”  Clowry later added, “To be clear, this is not only about my kid,” speaking of his son Quinn who played as a starting quarterback last season, “it is about the history, tradition, and Coaches, two of whom we have lost this year; it’s about the whole idea of losing such an important part of our lives!”

Dr. Ward and the Board of Education listened to the concerns and ultimately Ward stated, “We can agree that we will hear what people have to say. I will make a recommendation to the board that I view is in the best interest, overall, for the students involved, and that includes student safety as a primary concern.” The BOE agreed to place this item on the agenda, and to have the Athletic Director present, at the next scheduled meeting, Monday, February 5, 2018, at 7:30 PM.

For more information and to listen to the entire Pawling Central School District Board of Education Podcast go to https://drive.google.com/drive/folders/0B7Xuri6DydZ1MUQwaXdJMi1YLVE

← Newer Post
NOTICE OF PUBLIC HEARING ON A PROPOSED LOCAL LAW OF THE TOWN OF PAWLING, AS SET FORTH HEREIN
Older Post →
Ryan Snow and Ian Spens of Pawling named to Clarkson University Dean’s List